The best way to discover the desert from Marrakesh! A trip to the Sahara where you’ll marvel at the Moroccan landscape: from Marrakesh, crossing the High Atlas and visiting the kasbah Ait Ben Haddou, after which we’ll reach the highest dunes in Morocco where the Sahara begins. On the way back we’ll sleep in Ouarzazate to split up the jouirney from Merzouga to Marrakesh, making it less intense.

An exclusive way to get to know Morocco

For groups of minimum 2 people

We recommend that you arrive 1 night before the tour begins and stay 1 extra night when the tour ends. The tour leaves early in the morning of the 1st day and arrives late at night on the 4th day. You can add these 2 nights when you reserve.

Our first stop is the High Atlas mountain range, and more specifcially Tzi Tichka (2260m). We will take the highest asphalt road in Northern Africa to get there, a road that used to be only for suitable for mules until the French reconstructed it. During our ride, we will be able to see the ancient towns hiding in the valleys and a great variety of scenery. While heading to Ait Ben Haddou, we will cross the southern side of Atlas where you will find  completely different, strikingly green, view. In Ait Ben Haddou we will visit the famous Kasbah which is declared as a World Heritage Site by UNESCO.

After lunch, we will continue our adventure towards Dades Gorge, but first, we will pass through palm groves of Skoura to discover small villages and gardens hidden under the palm trees.

Haven’t had enough? Don’t worry there is loads left! We still need to see Dades Gorge, breathtaking scenery known as the fingers of the monkeys or the brain of the Atlas.

-The word Marrakesh actually means “the land of God” in bereber. This city is between the desert and the summit of Atlas.

-The legendary land of the 1000 moroccan kasbahs can be seen from the south of Alto Atlas. The kasbahs are built for defensive purposes.

– Ouarzazate and Ait Ben Haddou is also known as “the door of the desert” due to its picturesque character and many well-known movies such as Gladiator, The Jewel of the Nile, and  Sahara were shot there.

After having breakfast, we will take off to our next destination, Todra Gorge, which is a paradise for rock-climbers! The river Todra formed the daunting vertical walls that make up the beautiful scenery and will make you feel tiny! After having lunch in a local restaurant we will pass by Erfoud, also known as the “Gate of the Sahara Desert”, known for its film appearances and its location by Erg Chebbi. From here we will make our way to the Merzouga Dunes.

After enjoying the grandeur of the desert under millions of stars, we will head back to the hotel early in the morning to see the sun rise on the way while riding our friend, the camel. After having breakfast, we will start our trip and take a rest before we spend another wonderful day exploring the secrets of the desert.

– Erg Chebbi, with 30km length and 8km width, is actually the biggest desert in Morocco. Inside of the camping surrounded by dunes, there are a lot of Haimas that can be visited.

Enjoying the beautiful city of Ouarzazate , we began the return trip to Marrakech. Today we have a little more time to enjoy this beautiful city , its charm will amaze you . The city of Ouarzazate , current administrative center of the area and from where formerly departed caravans to Timbuktu in a long journey that lasted 52 days, here dominates the Draa Valley and the Oasis which receives the same name , considered the largest in Morocco and the richest in the production of dates. We continue the journey slowly until the afternoon to the city of origin, Marrakech.

We reccommend adding two extra nights in Morocco to make the most of this kind of tour: one night before and one night following the trip, due to the early start on the first day and the last finish on the last. Consequently, we cannot take responsibility if you miss the return flight.

We can happily organise your extra nights and even sort out accommodation in a traditional Moroccan riad. We can also organise your flights if you so wish! Don’t hesitate to contact us to let us know and we’ll sort out any doubts you have 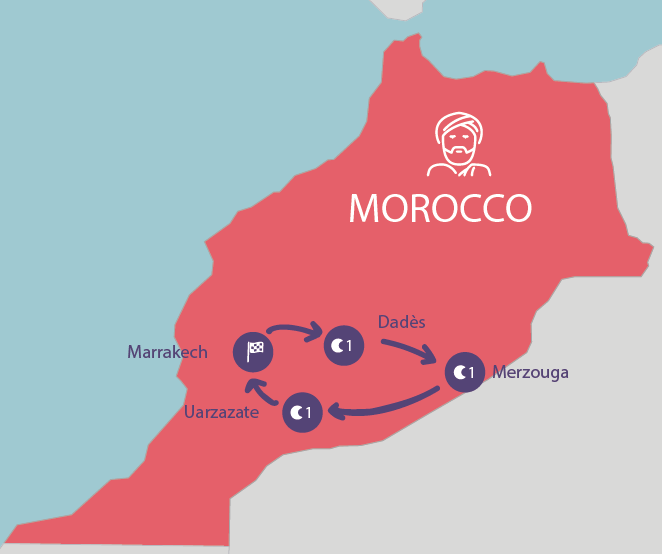 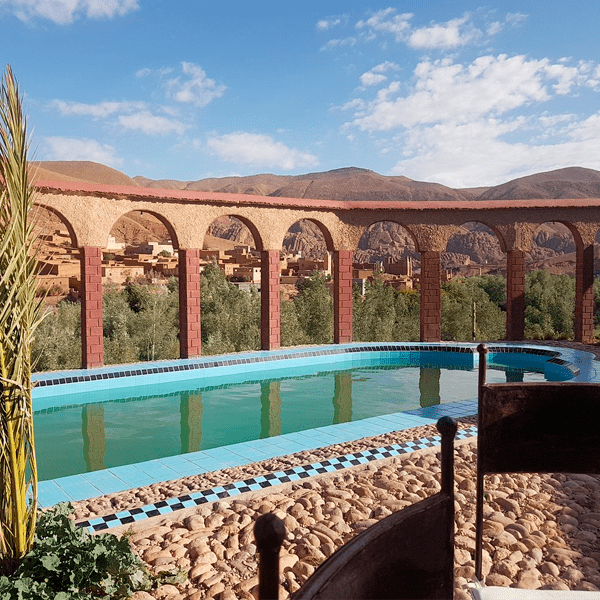 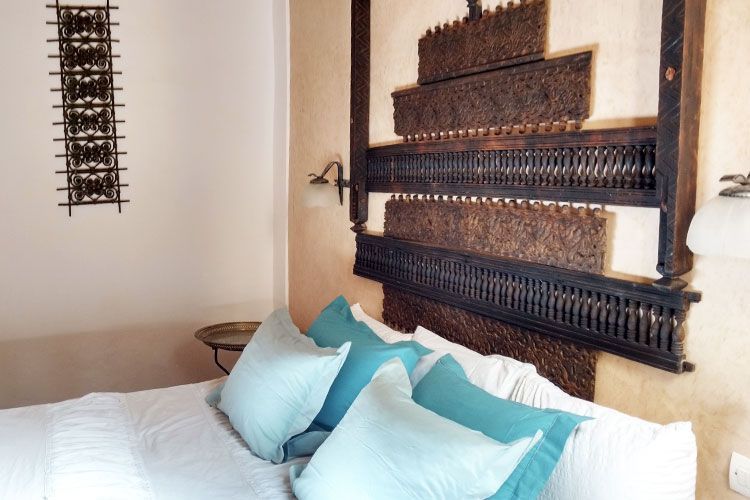 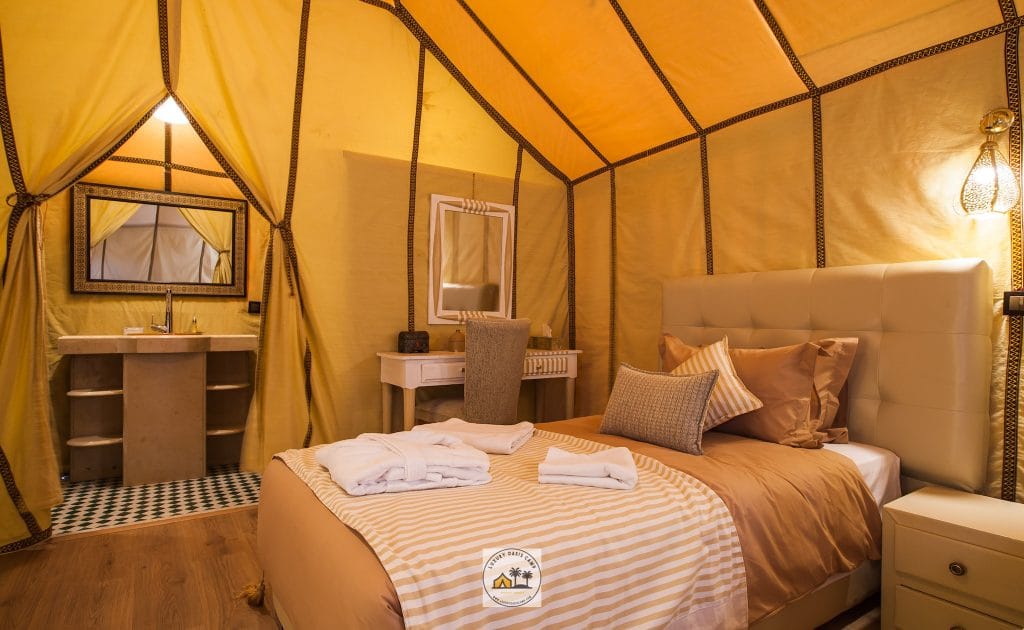 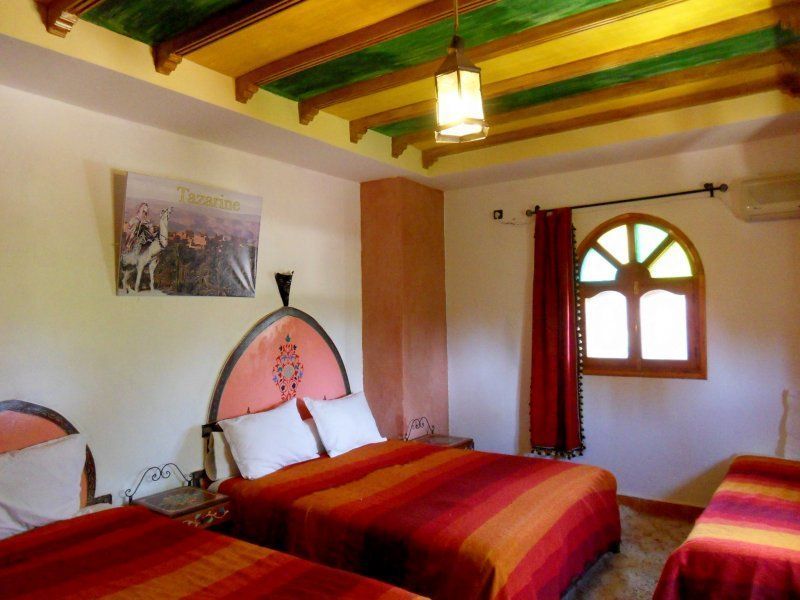 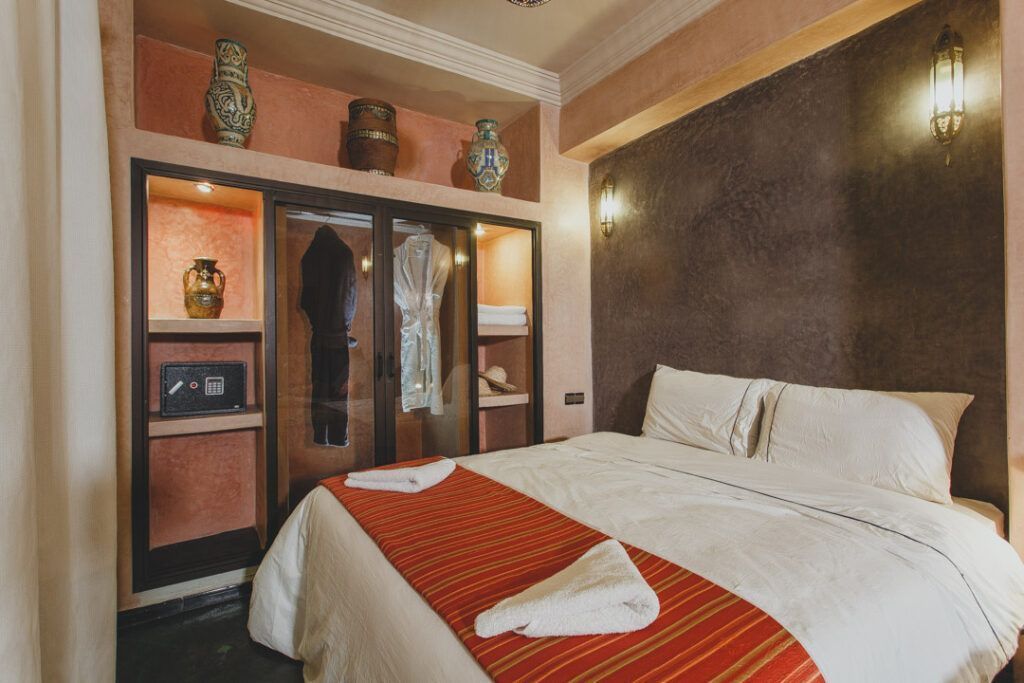 Before reserving, check you have all of the necessary documentos to travel to these countries.

The agency declines any responsibility in the event of problems at the borders, and people that don´t have the necessary documents will have to stay there.

Before leaving we advise you to check all of your documents for the travel to the countries indicated in the trip.

You can check here, or on the Ministery of Exterior webpage of every country.

Reserve your place with only 100€…

… and pay the rest 30 days before or also you can pay the complete trip now.

What hotels will you stay in during the tour? Take a look!

Don’t worry, here’s a link to all possible doubts about Moroccan tours resolved. Don’t think twice and get packing!