Experience an incredible minitrip around Morocco for 3 days! From Fez and its incredible old town we will travel across Morocco, passing the breaktaking Atlas mountains on our way and sleeping in the highest dunes in Morocco. It is here, in the Sahara Desert, that our trip will begin. What are you waiting for? Book your place now!

You can compare our tours departing from Marrakesh HERE

MOROCCO: EXPRESS TRIP TO THE DESERT FROM FEZ

Customised departures.  If you want to make this a private tour from Féz, contact us before booking to confirm availability, especially if you book at short notice. Contact us to check availability.

This trip will being once you have been collected from the hotels. From here we will travel directly to the city of Erfoud, also known as the Great South, in order to cross the Niddle Atlas Mountain Range through Ifran. We will stop at the most panoramic points of this journey to take pictures of the Berber Villages that surround the mountains. When we are coming down the mountains we have to stop in the city of Midelt.

From Midelt, an important military post in antiquity tasked with controlling the steps of the Atlas, we will begin our route towards the desert dunes to reach Merzouga in the afternoon. We will pass through Er Rachidia, a city on the banks of the Ziz River, to spend the night before enjoying the dunes the next day.

– The city of Erfoud is the regional capital Errachidía, it is a small modern city and administrative center of the area. Every year in October they celebrate the Festival of Dates, which fills the city with colorful and worthy traditions.

– South of the High Atlas, is the legendary Moroccan territory of 1000 kasbahs. The kashba is an ancient fortified city that was used as a room for the local chief and as a territorial defense system. All of the traditional architecture of the pre-Saharan valleys is based on the principle of fortification.

– In the Atlas Mountains you can smell the aromatic and medicinal plants that we can find in the traditional herbalist shops on the streets, often used to cook the local cuisine.

After having a good breakfast, we will visit Merzouga to uncover all of its hidden secrets. It´s impossible to visit these Moroccan cities and see everything in one trip, there is that much to see! If we have time we will hopefully arrive in Merzouga in time to watch the sunset.

Once in Merzouga, we will hop on our camles and travel to the Haimas campsite where we will be spending the night. Before we eat dinner, we will go up the great dune or alternatively to the smaller ones near the camp and enjoy a moment of peace of quiet, an atmosphere that you will only find in the desert. We will be sleeping in a Haima under a sky full of stars in the heart of the desert!

– The Dades gorges get their name from the river that excavates them.

– It is a huge gorge that runs several kilometers above sea level.

– It is also called “Way of the thousand kashbahs”, a title that only highlights how important they are.

– Rissani is famous for its market. This is the main attraction of the city and it has been celebrated on Tuesdays, Thursdays and Sundays for as long as anyone can remember.

– Rissani was the commercial capital of the country during the 14th century and that tradition is maintained.

– You must know that, despite being in the desert, Merzouga is a toursitic town, with hotels of all kinds from which you can book exursions to the desert, like the one we are going on!

After enjoying the tranquility of the desert as well as a sky full of stars, we will start our journey back to Fez. We will wake up early to see the sunrise from La Gran Duna. After we will have a BIG breakfast and replenish our strength as a 500 km journey back to Fez awaits. But this journey will be anything but boring, as we will be crossing the beautiful landscapes and villages of southern Morocco. We will pass through the Ziz valley, in addition to stopping at Midelt for lunch.

When we are ready we will get back on our bus. During this part of the journey we will pass through the Atlas mountains and we will go through Azrou, a city known for its carpets. Also prepare yourself to admire the landscape of nearby cedars and for the sighting of the Gibraltar monkeys that live in this area. We will  continue our journey, passing by Ifrane, known as “the Moroccan Switzerland” since all the rich people of Morocco spend the summer here. Little by little we will get closer to Fez, which we should reach by the afternoon.

– The city of Azrou is well known in Morocco for its carpet crafts.

– The Azrou region was one of the first areas of Maghreb to be inhabited by humans.

– In Ifrane you can find a sculpture of a lion made during the Second World War to commemorate the last lion that inhabited the Atlas mountains.

*This schedule may suffer changes due to traffic, weather or other external and uncontrollable circumstances

Collection from the hotel and the beginning of the trip between 7:00 – 8:00 am

When doing this type of tour we recommend adding 2 extra nights in Fez (both the night before the start of the tour and the night before you return home). Why? Because the tour starts early in the morning and on the last day, we will arrive back in Fez in the evening. Therefore, we are not responsible if you miss your flight home.

To get to Fez there are low cost flights EVERYDAY from both Madrid and Barcelona. Book your flights HERE.

If you have any problems finding a flight for the times and dates that you need, we can help! Make sure you read this article too! 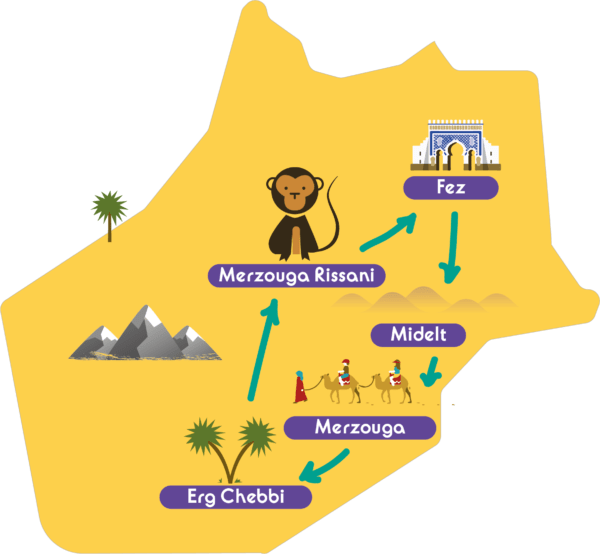 … and pay the rest when you arrive to Fez

* Spots depending on availability

Early pick-up at your Hotel in Fez. Start of the tour! Discover Morocco in a fast, intense way, enjoying tevery minuet and sharing the experience with other travelers.

Accommodation in Fez. If you have not yet planned your nights in Fez, we can help you with the accommodation. What do you think about  enjoying a well deserved rest in a beautiful riad?

We can offer full tours of Morocco so you don´t miss out on seeing anything in this incredible country!

Don´t worry if you are still having some doubts about travelling to Morocoo, here is a link which will tell you all you need to know about Morocco. Don´t think twice, pack your suitcases now!