Join this incredible 1-day trip from Marrakech to Essaouira! From the imperial city of Marrakesh and its thriving souks, we will head for this beautiful coastal city. What are you waiting for? Come and discover this old Portuguese city as well as Morocco’s nature and history!

Daily departures. If you are booking at short notice, please contact us directly soon so we can confirm availability.

Early morning pick up at the hotel in Marrakesh to start the tour! Discover Morocco quickly, thoroughly, and enjoying the ride with other adventurers.

We have received many requests for day trips to different points of interest outside of Marrakech, so here we offer this brief but intense one day trip. We have a variety of daytrip options in Morocco, fit for all types of traveller and budgets.

Here’s a useful article on the best daytrips from Marrakech

Still have doubts? Don’t worry, here’s a link to all possible doubts about Moroccan tours resolved. Don’t think twice and get packing!

Essaouira is also known as Mogador. This place is a beautiful seaside city with a rich history which has become one of the most fascinating spots in the country on the Atlantic coast. This former Portuguese city still preserves the flavor of what used to be.

One of Essaouira’s most striking features is the layout of the city itself. Its European grid shaped paths and urban areas are surrounded by old  bastions which protected the city in the late eighteenth century. Due to its nature reserve on the island Mogador, its Medina (or old town) is now a UNESCO World Heritage Site.

This beautiful city that seems lost in time, is especially quiet and pleasant given the mildness of its climate. Its magnificent white sand beaches make this destination a must see on a tour of southern Morocco. Thanks to the trade winds, Essaouira is known as the Windy City, and people come from all over the world to windsurf here.

Legend says there is a hidden message between the narrow streets of the Medina designed by Theodore Cornut under the orders of Sultan Sidi Mohammed Ben Abdallah. Come to find out what it is! 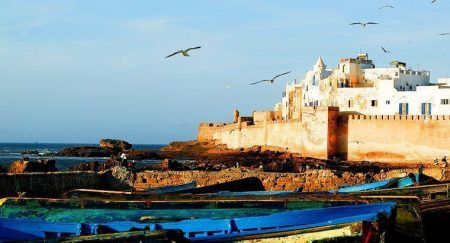 *This schedule may suffer changes due to traffic, weather or other external and unpredictable reasons.

Book your trip for only 7€…

…the outstanding balance will be paid once you arrive in Marrakesh