Experience an incredible 3-day tour from Marrakech to the Sahara Desert! From a bustling souk in Marrakesh, to tiny villages hidden by palm trees, and finally riding a camel to the desert where you’ll sleep among stars and dunes, this 3 day express tour hits the balance between speed and detail; not to be missed!

You can compare our tours departing from Marrakesh HERE

MOROCCO: EXPRESS TOUR TO THE DESERT

Daily departures. If you are booking at short notice, please contact us directly soon so we can confirm availability.

Our first stop is the High Atlas mountain range, and more specifically Tzi Tichka (2260m). We will take the highest asphalt road in Northern Africa to get there, a road that used to be only for suitable for mules until the French reconstructed it. During our ride, we will be able to see the ancient towns hiding in the valleys and a great variety of scenery. While heading to Ait Ben Haddou, we will cross the southern side of Atlas where you will find  completely different, strikingly green, view. In Ait Ben Haddou we will visit the famous Kasbah which is declared as a World Heritage Site by UNESCO.

After lunch, we will continue our adventure towards Throats of Dades, but first, we will pass through palm groves ofSkoura to discover small villages and gardens hidden under the palm trees.

Haven’t had enough? Don’t worry there is loads left! We still need to see Dades Gorge, breathtaking scenery known as the fingers of the monkeys or the brain of the Atlas.

-The word Marrakesh actually means “the land of God” in Bereber. This city is between the desert and the summit of High Atlas

-The legendary land of the 1000 moroccan kasbahs can be seen from the south of High  Atlas. The kasbahs, or fortresses, are built for defensive purposes

– Ouarzazate and Ait Ben Haddou are also known as “the door of the desert” due to their picturesque character. Many well-known movies such as Gladiator, The Jewel of the Nile, and Sahara were shot here

After having breakfast, we will take off to our next destination, Throats of Todra, which is a paradise for rock-climbers! The river Todra formed the daunting vertical walls that make up the beautiful scenery and will make you feel tiny! After having lunch in a local restaurant we will pass by Erfoud, also known as the “Gate of the Sahara Desert”, known for its film appearances and its location by Erg Chebbi. From here we will make our way to the Merzouga Dunes.

– It is also known as the “Route of the 1000 Kashbahs”, showing the importance of this place

– Rissani is famous for its market. Locals initiated the market centuries ago and it still opens now on Tuesdays, Thursdays and Sundays

–  Even though Merzouga is in the middle of the desert, it is still full of tourism so you will be able to find every type of hotel and activity you could want!

After enjoying the grandeur of the desert under millions of stars, we will start heading back  early in the morning to see the sun rise whilst riding our friend the camel. After having breakfast, we will pass through the silent city of Ouarzazate. This city is famous for its Kasbah Teloulet and movie studios. This city is now the administrative center of Morocco and is also the starting point for the 52-day camel ride to Timbuktu. You will also find the Valley of Draâ here, whose main produce is dates. From here we will continue our trip towards Marrakesh.

The arrival time in Marrakech will be around 20:00h.

– Erg Chebbi, with 30km length and 8km width, is actually the biggest desert in Morocco. Inside the area surrounded by dunes, there are a lot of Haimas to visit

* This schedule may suffer changes due to traffic, weather or other external and uncontrollable circumstances.

To do this kind of tour, we recommend adding 2 extra nights in Marrakesh (one before the tour and one after). As the start of the tour is early in the morning and the tour returns in the evening. As a result, we can’t be held responsible if you miss your return flight.

We can process the extra nights where you’ll stay in a fantastic Riad, or you can organize it yourself. Either way, you have a contact form and our details so you let us know, and so we can solve any of your doubts ?

If you have any problem regarding flights or schedules, we can give you a hand: read this article or don’t hesitate to contact us 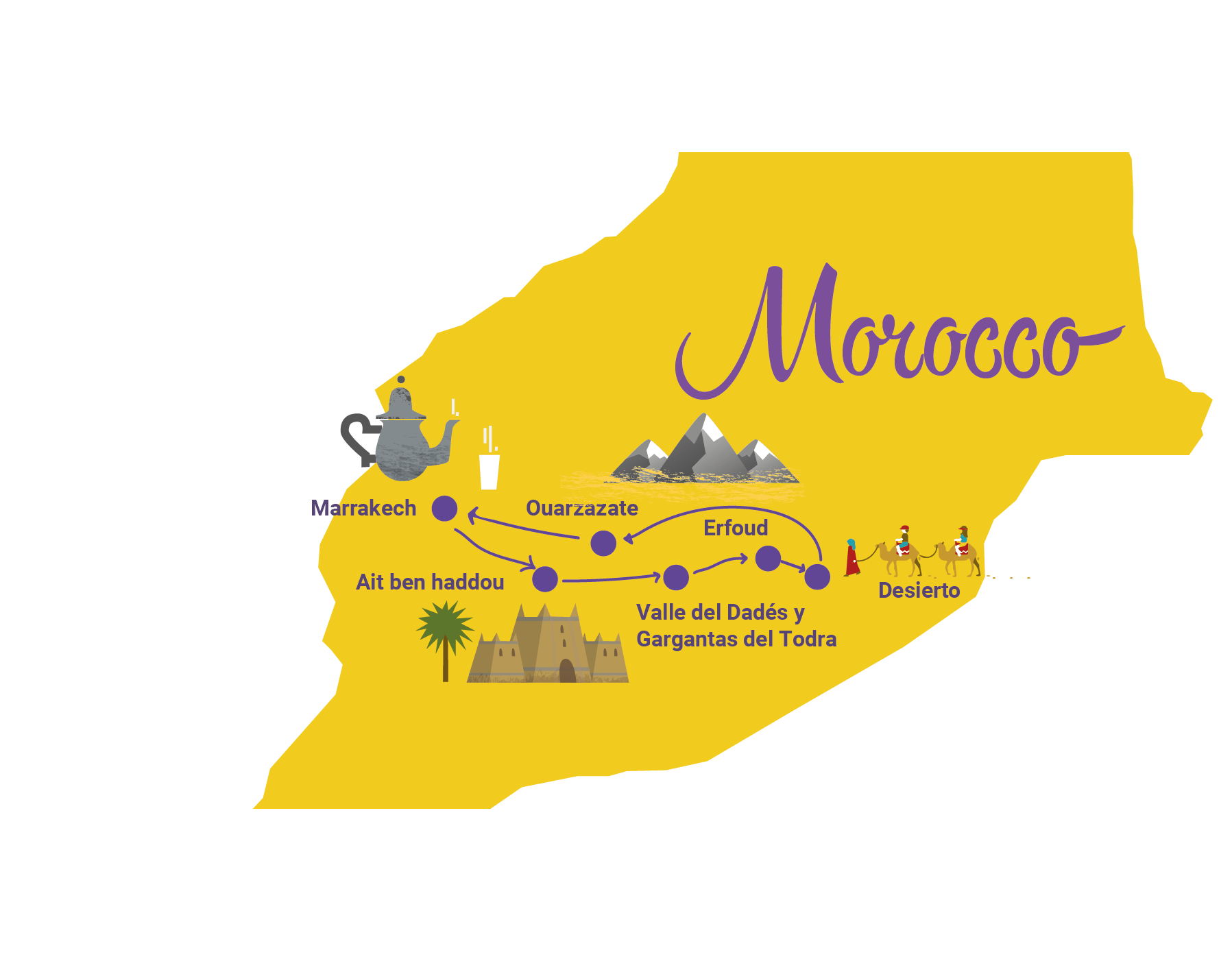 …the outstanding balance will be payed once you arrive in Marrakech

Early morning pick up at the hotel in Marrakesh to start the tour! Discover Morocco quickly, thoroughly, and enjoying the ride with other adventurers.

What will the accommodation be like on this trip? Take a look here!

We suggest you choose a complete tour so you can get to see as much of Morocco as possible!

Still have doubts? Don’t worry, here’s a link to all possible doubts about Moroccan tours resolved. Don’t think twice and get packing!

Travel with us and Enjoy Morocco!