From the Austro-Hungarian Empire cities (Budapest, Bratislava and Vienna), we will arrive in Kafka’s city, Prague, where we will try a variety of Czech Beers. We present the Imperial Cities Tour passing through some of the prettiest and unforgettable cities to visit in Europe.

Our trip to the imperial cities will make a start in the Hungarian capital, Budapest. The city is split into two sections: ‘Buda’ on the west side of the river Danube and ‘Pest’ on the east side. Today, they have been merged together to form a capital that is among one of the most important cities in the European Union.

We will wait until 14.30 to start with a trip to the most important monuments.

Those who arrive in the morning can make the most of their time and take the metro line 1, the second oldest in all of Europe, and visit the city park with its Vajdahunyad castle, or relax in the Szechenyi thermal baths.

In our guided visit we will meet the Jewish district, where you can find the biggest synagogue in Europe, and the second in the world. Advancing upwards, we will arrive at the exquisite Andrassy Avenue­ (a boulevard in the city) and then at St. Stephen’s Basilica (the third largest church building in Hungary and named after the country’s first king), where the late legendary Hungarian footballer Puskas is buried!

After crossing the mythical chain bridge (the first permanent stone bridge built connecting Buda and Pest), you will see the green hills of Buda, with its historical museums, the Fishermen’s Bastion and other amazing views. Tired from walking? Enjoy a tasteful dinner and recharge because we will be about to spend the night between ruins bars and having fun in the thermal baths in a SPA-rty!

– The yellow line of Budapest metro is the second oldest underground railway in the world built from 1894 to 1896, the first being the London Underground

– Budapest has 118 thermal springs varying from 21-78 Degrees Celsius, providing over 70 million liters of water per day

-According to a survey by the British Foreign Office, the Hungarian language is the world’s most difficult language to learn 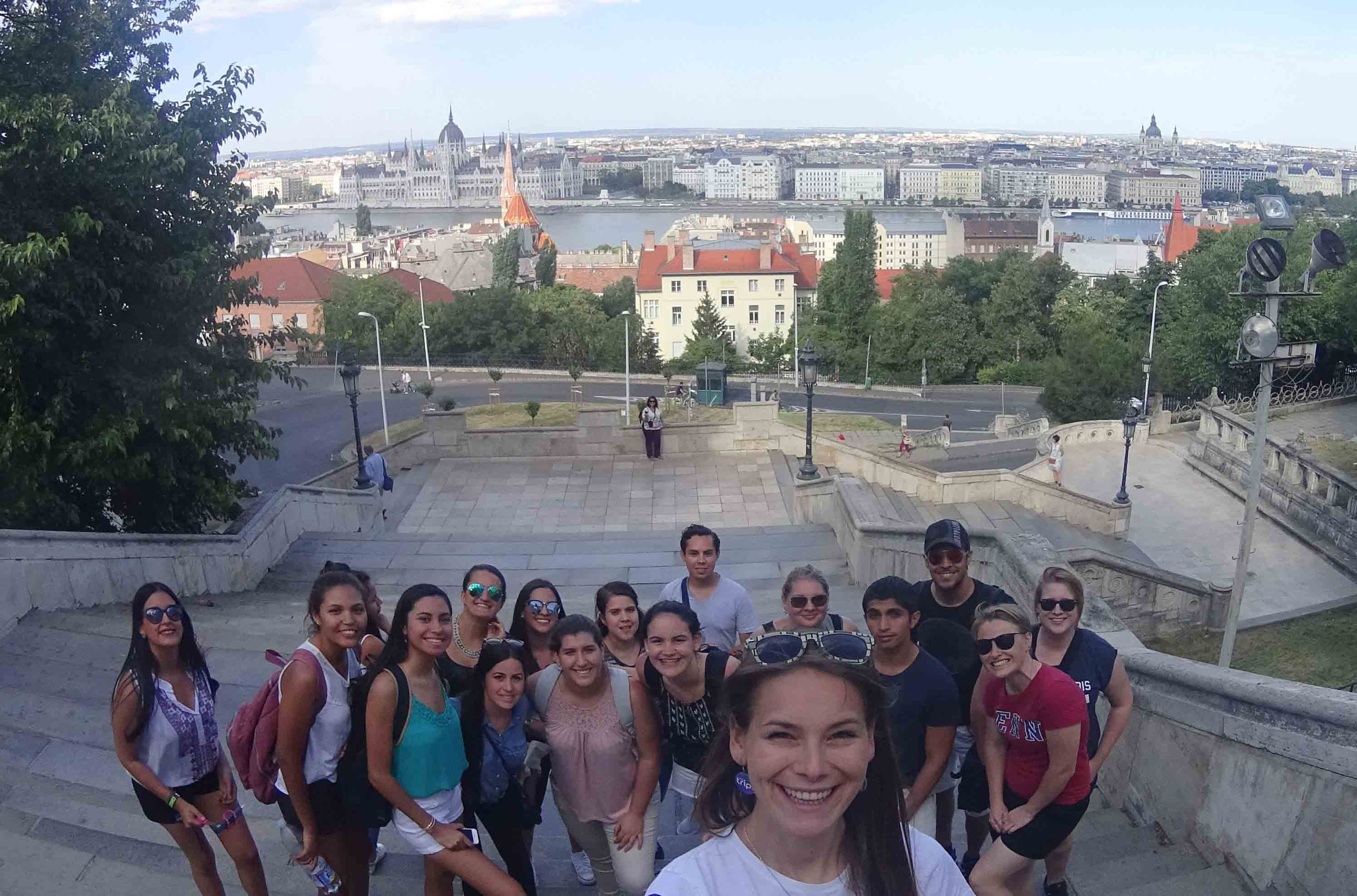 It is time for us to move on our trip to the imperial cities… today the Unibus passes through Slovakia to visit its capital Bratislava, starting with the castle on the bank of the Danube, and then the rest of the elegant city, rich with historical bronze statues. After a Slovak meal, “Bryndzové halušky”, we’ll change our direction and head towards Austria and another capital (our third in one day!): Vienna. You can brag when you go home that you had breakfast in Budapest, lunch in Bratislava and dinner in Vienna!

– In the streets of Bratislava there are crowns on the floor, symbolizing the 19 kings and queens of the Austro-Hungarian empire, who were buried in the St Martin Cathedral.

Here you have an article you can’t miss out on about the Most Famous Austrians! 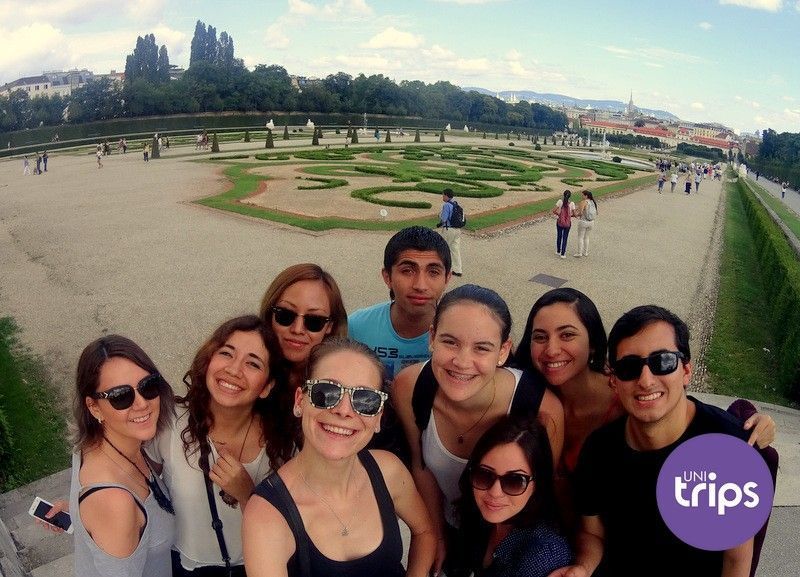 An exciting day awaits us on this imperial cities tour and our time in Austria! In the morning, we shall have a guided tour of the famous monumental ring of the city, ‘the Ringstrasse’, admiring the magnificent 19th century buildings such as the State Opera, the Burgtheater (also known as the ‘Austrian National Theatre’ in Vienna- listed amongst the most important German language theatres in the world), the Museum of Biology and History and a list of other exquisite places. Have you ever heard of the ‘Hofburg’, the former residence of the royal court? Also on the list is St. Stephen’s Square with the Gothic cathedral of the same name known as the most important church in Vienna. Feeling hungry already? You can quench your hunger with a typical schnitzel or go to Hotel Sacher, where the famous ‘Sacher torte’ (a particular type of chocolate cake) was invented.

The afternoon will be spent exploring the Schoenbrunn Palace. Its magnificent architecture is encompassed by its lovely gardens, dating between the 18th century and 1918. The palace served as the summer manor of the Habsburg monarchy and has is now a source of major tourist attraction. The royal residency consists of 22 rooms where Empress Sissi (Empress Elizabeth of Austria), Emperor Franz Joseph (the Empress’s husband) alongside his sons carried out their studies and played. 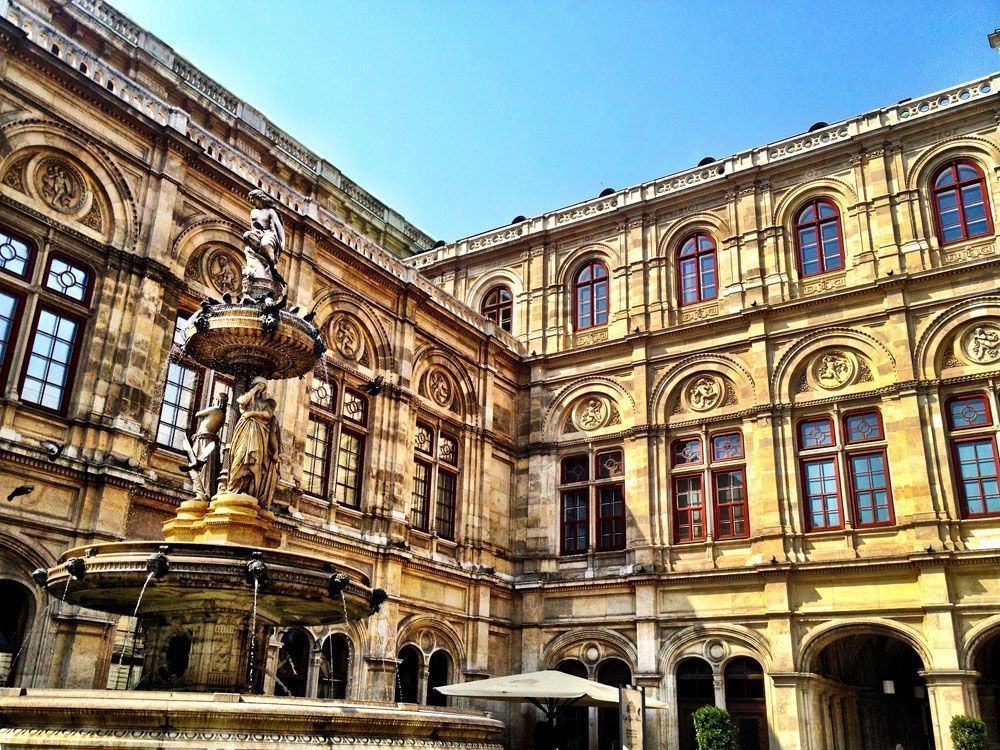 -Vienna is a city of dogs. Dogs are welcome on all transport, and in bars and cafes. As a result, you will find drinking fountains at the entrance of each of these premises

-The ecological and environmental culture is strictly complied with. In Vienna every time a tree planted is destroyed, a new one is planted in its place and many leave a commemorative plaque indicating its name

-The fight for gender and sexual equality is very evident in Vienna, a city which began reshaping public spaces to help benefit both genders equally in 1991, a project called ‘gender mainstreaming’

Welcome to the Czech Republic!

Before carrying on our imperial cities tour and before heading to Prague we will stop in a beautiful little town, Cesky Krumlow, known as the ‘Florence of Czech Republic’, before heading north towards the ‘Golden City’, Prague.

Prague is the capital of the Czech Republic and the largest city in the region of Bohemia. It is known to be one of the most beautiful cities in Europe and you won’t wonder why! Its location in the center of Europe and its good communication with neighboring countries make it one of the most visited destinations on the European continent. During its history, the city has received many names, such as “The Golden City”, “City of a Hundred Spires” and “The Heart of Europe”.

Furthermore, Prague was born from the union of five ancient cities on the waters of the Vltava River and has traditionally been the political, economic and cultural center of the Czech Republic. 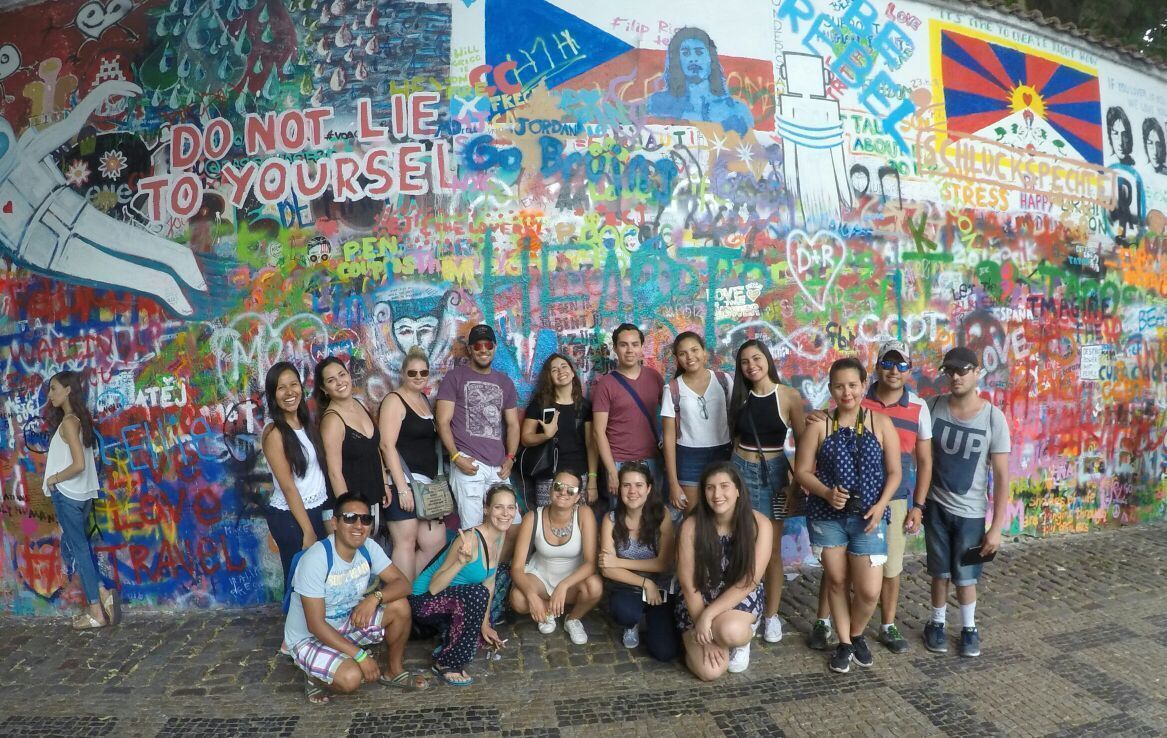 Lets make the most of the morning to visit this incredible city. We’ll go from the gunpowder tower and pass by the beautiful, modernist Municipal House to the Wenceslas square, universally known for the scene in “Prague Spring”. The state theatre, where various works of Mozart were first shown, and the Jewish District are all close by. After, we can pass by the Clementinum, the old Jesuit college, to finally arrive at the Charles Bridge, with its 30 famous baroque sculptures. If we have time, we can head to the “Old town Square” with its outstanding and fascinating astronomical clock.

In the afternoon we still have a lot to see of this beautiful city. If you have the energy, you can follow the path up to the Prague Castle, which sits in the bend of the Moldava river, and is the biggest castle in the world. Get to know its patios, where we will find the Saint Vito Cathedral, with its artistic treasures, gothic palaces and ancient palace of the Bohemian kings with the magnificent hall of Vladislav, which was the biggest civil hall in Europe in its time. Also, the St George Basilica, made in the year 920 and the Golden Lane, where the castle guards, medieval artisans, goldsmiths, alchemists and even the great Franz Kafka all stayed.

We hope that you didn’t get too tired today, because the price of a huge variety of czech beers is very very cheap…

– Prague Beer is cheaper than water! This is because beer is part of the everyday life and is sweet and drinkable. Awesome!

– Prague is not at its height of fashion. The city still sees the “socks and sandals” look… Don’t believe us? Keep an eye out when you go!

– The Prague Castle is described as the largest ancient castle on Earth. This is where the monarchy of Bohemia and the presidents of the Czech Republic stay. (We will visit this site and highlight the Golden Lane, as well as the Black and White Towers) 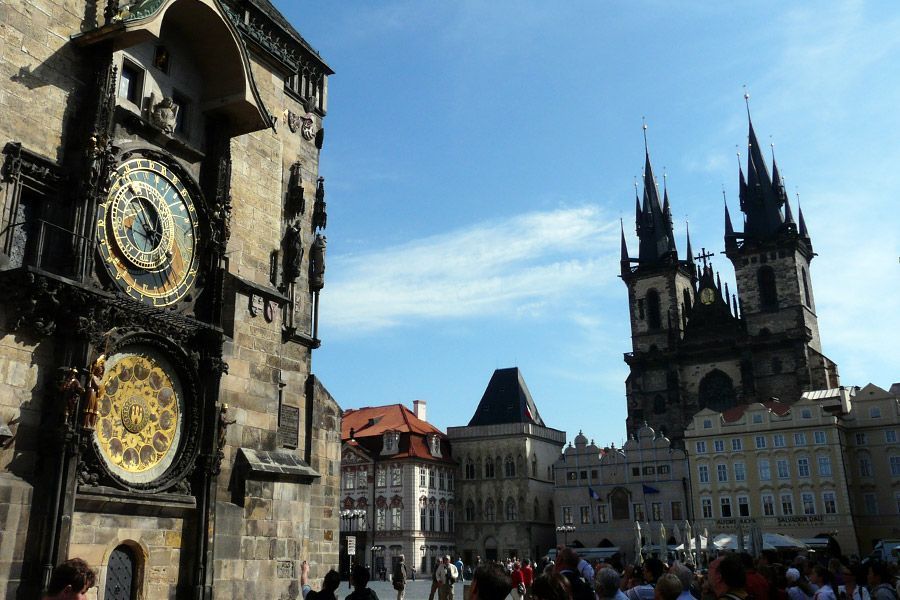 Throughout this emotional week we say goodbye in the centre of Europe, but we’re sure that we’ll see you again soon in some corner of the world!

*Those extras marked with (*) in the description need to be selected when you reserve your place for the tour through the reservation form. This is because numbers need to be booked far in advance.

**Those extras marked with (**) in the description are not in the form used to book your place. We will be in touch two weeks before the tour to ask about your interest in these extras and you can pay directly to the tour leader during the trip.

The cities where we will sleep are subject to availability, depending on the flexibility of the hotels or hostels. The quality of the establishment will not change.

You will receive more information by email once reserved and before the departure.
To get to Budapest there are low cost flights EVERY DAY with:

Check prices on the companies’ websites, or with comparison websites like:

If you have any problem regarding flights or schedules on the days you want, we can give you a hand. Before anything, we advise you to read this article! 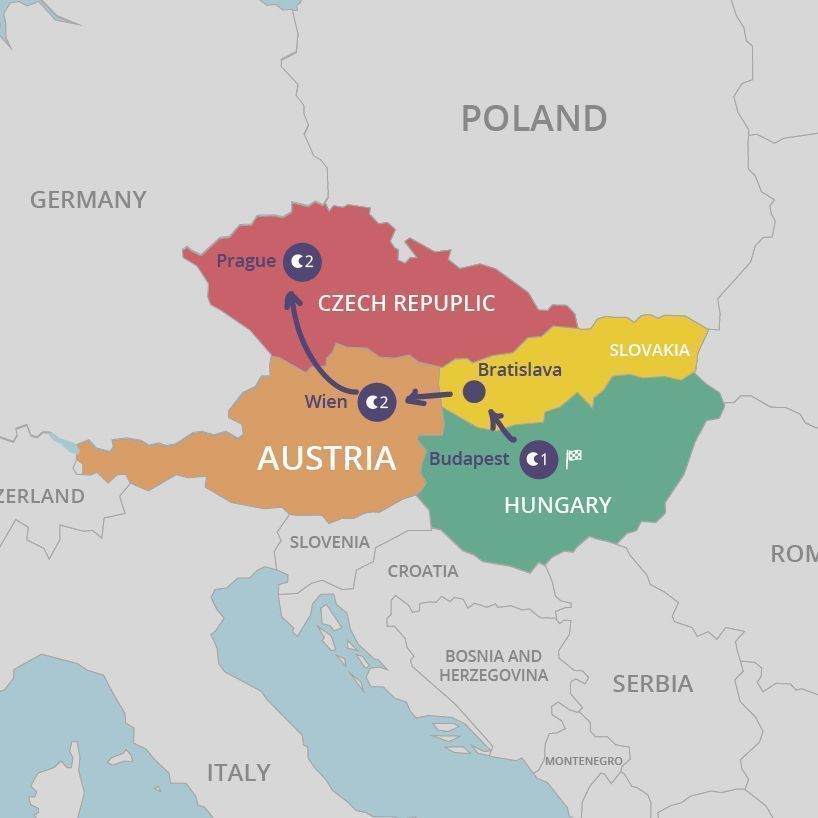 Book your spot with just an small deposit…

…yand the rest 45 days before departure

Do you have any doubts? We would advise that you read this article to clarify these doubts.

Being a group trip, it will only go ahead with a minimum of 10 participants each trip.

If 10 people or fewer are signed up, the tour will be carried out by train.

The multiple rooms are from 3 to 9 beds, according to the availability of the establishment. If you want a double or single room, mark this extra in your booking form.

The entire trip is organised by Unitrips, a travel agency which is registered in the General Directorate of Tourism of the community of Madrid with CICMA 2900 and is a member of FETAVE.