Leave all of your daily stresses behind and join Unitrips on this Greek discovery trip to paradise! Do you want a holiday that you will never forget? Then come with us to see the everything Greece has to offer, from the incredible capital and its narrow little streets that are full of culture, to the picturesque beaches of Santorini and the unforgettable local parties in Mykonos! Trust us, this is a trip that you don’t want to miss!

Our Greek disovery journey will start in the Greek capital, Athens. The birthplace of great phiosophers and artists of the antiquity, and furthermore had an essential role in the development of democracy. there is no  place in the world like Athens. You can´t miss out on the opportunity to explore the ancient greek cultures and submerge yourself in the magic of its grand templesand majestic buildings which have proven capable of enduring, almost untouched, the passage of time.

Why don´t you take advantage of the time you have here and visit the historic and famous monuments and places in this city?

Meeting point to be determined, throughout the day. We will start a trip around the main historical monuments and places in the city. Get to know the Acropolis of Athens, which is the most important building in all of Greece. In ancient times, the high city was the headquarters of the main places of worship. And how could we not go and see the most visited monument in Athens, the Pantheon. We’ll finish off at the Syntagma square, a stunning spot, full of life. Tired of so much walking? Ignore it and power through, you still need to experience the nightlife that this capital city has to offer.

The second day on this Greek discovery tour will begin with the collection from the hotel in order to start the tour of the city of Athens, which like all tours will last for a few hours.

During the panoramic tour of the city you will get the chance to  admire the glorious testimonies to the past and present of Athens, the Panathenaic Stadium or Kalimármaro where the first Olympic Games of the modern era were held in 1896. What´s more we will visit the Arch of Hadrian, the Temple of Olympian Zeus, the Parliament which is home to the monument of the unknow soldier where the traditional Changing of the Gaurd takes place, in the Plaza de la Constitución (Syntagma Square).

We will continue with the guided visit of the Acropolis, here we will begin to walk up the steep steps to the “high city”, entering through the Propylea which streches for 150 fet across the entire western front. Beyond the Propylea, on the top of the hill, you will find the Parthenon which was built between 447 and 432 BC.building that was dedicated to the goddess Athena, patroness of the city. From here we will also see the Erectión, a temple which was built in honor of Athena. Here you can also find the Caryatids, sculptures of beautiful virgins on the roof, one of the most elegant structures of the Acropolis.

After this visit you can choose to return to the hotel or you can continue to enjoy and explore this beautiful city on your own accord.

Today on our Greek road trip we will wake up, eat a big breakfast to make sure we have enough energy for the day and head to the port. From the port we will hop on the ferry and begin our tour of the first Greek Island on our itinerary, the small  yet cosmopolitan island of Mykonos. This island is known across the world for its incredible beaches and nightlife. The nightclubs on the beachfront are just as popular in winter as they are in summer, for this reason Mykonos is called the Ibiza of Greece.

This island belongs to  the archipelago of the Cyclades Islands, where the Aegean Sea is located. According to Greek mythology, the islands adopted this name from the hero Mykono, son of Apollo, which is also why it is known as the island of light. Who doesn’t dream of visiting Mykonos, an island full of typical greek white houses covered in colourful flowers, long sandy beaches and crystal clear waters? As for the cuisine on this isalnd, Mediterranean food is the most common, you can try many different types of salads, combined with various different greek cheeses such as feta. Musaka, similar to lasagna, is something you need to try whilst on the island.

In addition to experiencing the parties in the clubs that are located on the beachfront, there are many other things that you can do on the island, for example you can visit Chora, a famous city in Mykonos. This city is beautiful, full of whitewashed houses with colourful doors and balconies, its narrow streets, the seductive little Venice neighbourhood as well of the Kastro neighbourhood which is home to a cattle and the famous mills- It is a city that adorns the soft hills of Mykonos and gives off a quaint and romantic feel. And, of course you need to see the mascot of the island: the Pelican Petros, which can be located in the attractive port of Mykonos town, accompanied by two other friends.

The beaches, many of which are nudist, are the most popular places on the island. Beaches such as Paranga, Agios Sotis, Platis Gialos, Paradise and Panormos are known by lovers of after hours. Today you will have the chance to relax on one of these beaches, have a swim in the crystal clear waters, go snorkling or windsurfing…. whatever you want to do!

To end this incredible day you can go and experience the nightlife of the island in one of the most famous clubs: Super Paradise, Paradise or 0 Skandinavian.

After a big night out yesterday it is time to wake up and discover more of this incredible country. We will have a big breakfast to gain some strenght and then set off to sail the seas, this time in search of the amazing island of Santorini. It´s your turn to fall in love with the white and blue houses that are full of character and can be located on the edge of the abyss. From here you can admire the picturesque views.

Every single detail of Santorini is beautiful. It has a half-moon shape inside it, where the volcano of the island used to be located. In the western part its formation is steep and rocky, while in the south it slowly descends into the sea, where countless travellers fall in love with the dark sand beaches.

Make sure you have some time to discover its many beaches, hidden coves, all of which are marked by the beauty of their historical volcanic nature. There are beaches with black and red sand which contrast with the blue colour of the Aegean sea, a unique and fascinating sight. The main beaches are in the eastern part of the island, around the villages of Kamari and Perissa.

There is a theory which states that, in Santorini, the lost Altantis could be located. There are some who confirm this theory, mainly the Greeks who like and want to believe  it. 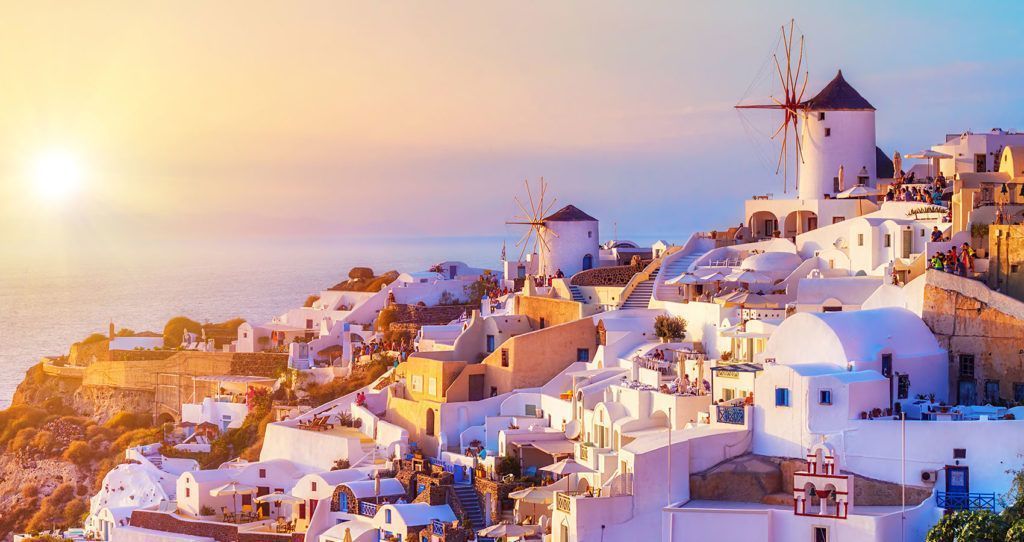 We will finish this Greek discovery trip with a transfer from our hotel to the port or alternatively the airport, depending on which mode of transport you plan on taking.

We hope that you have enjoyed this trip around the most famous Greek Islands and that you have many amazing memories and stories to share upon your return. But we cannot say goodbye without giving you some information that you need to know after this getaway to Egéo.

*The program could suffer unforeseen changes due to weather conditions, traffic… or the ability of the group to respect meeting times.

To get to Athens airport (ATH) there are frequent low cost flights with:

Check prices on the companies’ websites, or with comparison websites like:

If you have any problem regarding flights or schedules on the days you want, we can give you a hand. Before anything, we advise you to read this article!

A low price given everything that is included!

*Price per person in a triple room during the low season

Go whenever suits you!