Best Erasmus Guide to A Coruña

Coruña (or A Coruña) is one of the most special cities in Spain. It completes the four different Galician provinces, together with Vigo, Ourense and Pontevedra and is the most north-eastern zone of the Penínsular.

It is said that this is the perfect to do your Erasmus in A Coruña year as it has everything you need here: the people, the peace and quiet, the parties, the culture, the connections and the tourism, all at once. It is also the perfect place to visit for those who love watersports. They have everything on offer here, surfing, bodyboarding, kitesurfing and they also hold competitions for all of the latter at the local beaches.

What you need to see on your Erasmus in A Coruña

Sport is very popular here, which is facilitated due to the fact that this city is home to the largest seafront in Europe, along with one of the most incredible visits of the Atlantic. It is also a very flat city with almost no hills, therefore it is also ideal for people who like to cycle.

Between the main touristic streets of Coruña you will not find monuments but instead green countryside and beaches. But if you do want to go and admire a monument or two, you should go and visit the Torre de Hércules.

This tower has the privilege of being the only roman forum and the oldest, that is still functioning, in the world. Therefore it was declared a World Heritage side by UNESCO in 2009. This tower is riddled with myths and stories, one of which tells the story of Hércules arriving by boat on  the peninsular to defeat the giant Gerión (who had terrified the population and forced them to hand over all of their chlidren). Hércules cut off his head and buried him where the tower lies today, which explains why it was given this name. 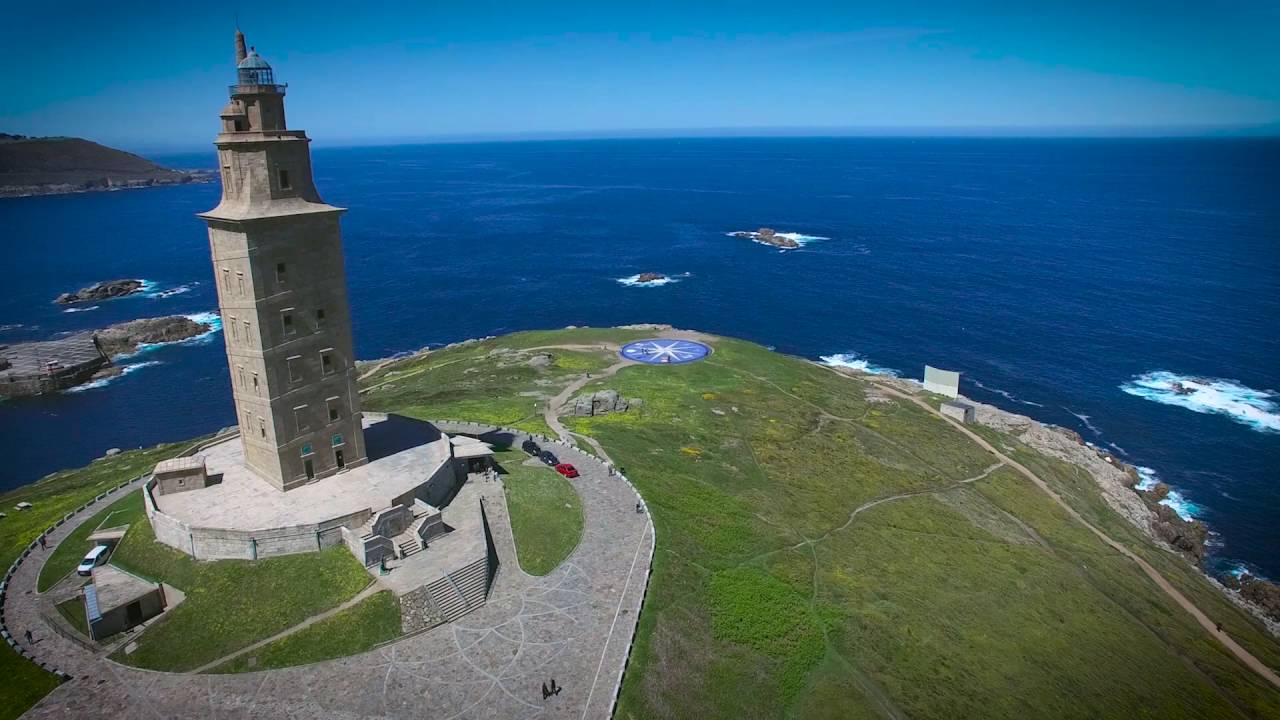 With regard to the beaches, that of Orzán is the most popular among surfers from the city of Coruña, what’s more the sand on this beach is taken advantage of by thousands when it is sunny! That of Riazor is one of the most beautiful urban beaches in Spain.

Living in A Coruña

Coruña is not a city that has been overtaken by students, maybe because the campus is located outside of the centre of the city. But having said this, it is the home of many young people. Coruña is also very cheap in comparison to the Spanish cities, another reason as to why it attracts young people, especially students.

Due to the latter, we recommend that you live in the centre (near plaza de Pontevedra, calle Juan Fl´rez, etc.) or in the zone of 4 Caminos, which is where the majority of students live. The University is located on the outskirts of the city and around it there isn’t really anything to do or see, hence why is it better to live in the centre.

You can find a flat in Coruña for about 150 euros a month (per persona), in other words it is very affordable.

In Coruña there are various campuses. The main one is Elviña. Some of the university residences are fairly modern, however they are all on the outskirts of the city, which are areas that aren’t very well connected to the city, especially during the weekend.

Where to go out on your Erasmus in A Coruña

The most popular club for students in A Coruña is Sala Pelícano, and it is one of the biggest in Spain which hosts events which showcase the hottest and most famous artists from all over the world. Entry is 8 euros with a drink included. This is very cheap in comparission to clubs in Madrid.

The majority of pubs in Coruña are all located in a building called “Los Cantones Village” and they are usually all very crowded. My, Dux, Amua, Brit and Royale are some of the most popular. Royale also hosts a university night on a thursday where entry is free, but it normally costs 6 euros.

Other popular pubs in the city include Moon5 nd the Playa Club. There are also many more that can be found on Calle Juan Canalejo. 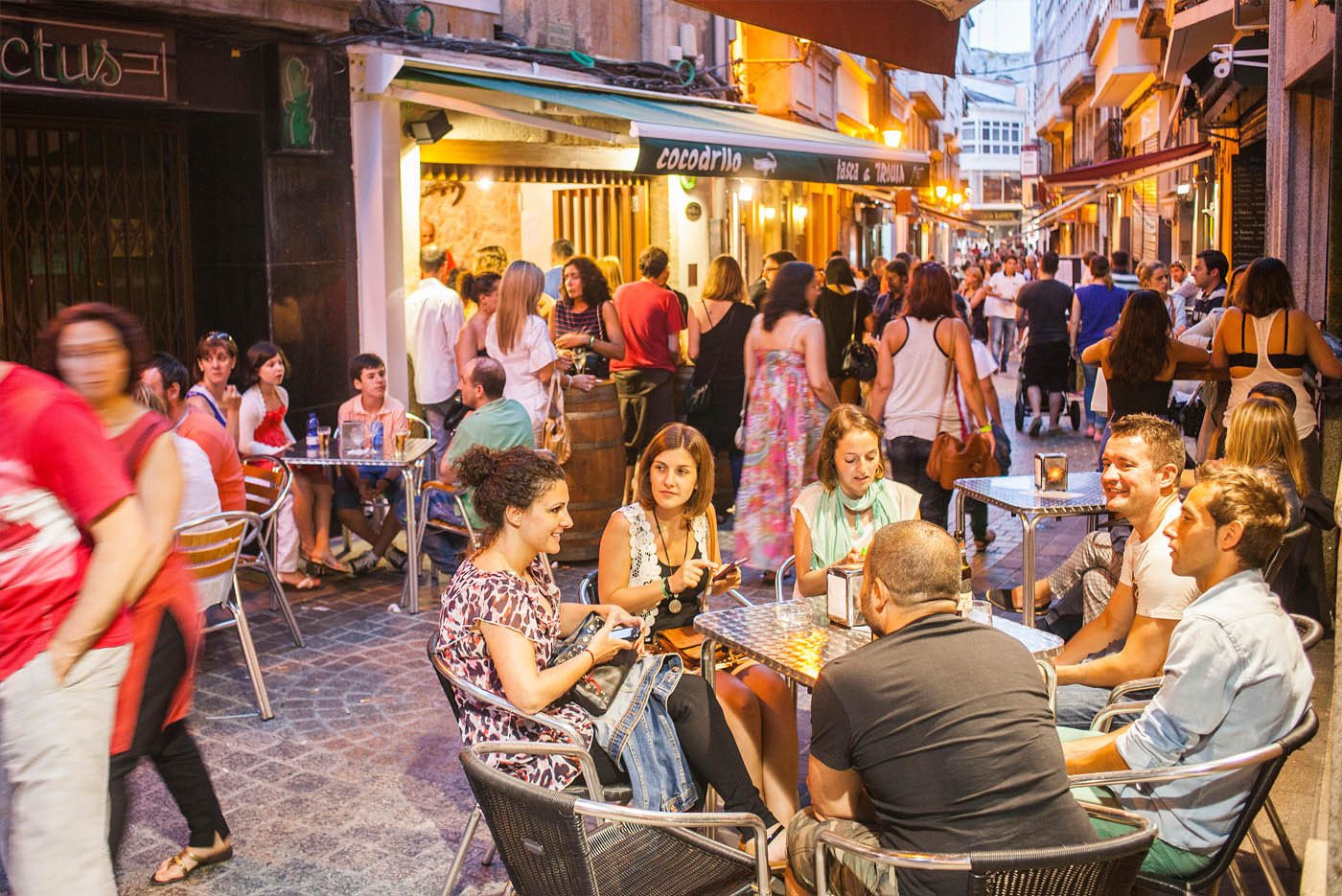 Galician food is said to be the best in Spain, and this isn´t just what the Galicians say, it is a known and accepted fact throughout the whole of Spain. On your Erasmus in A Coruña – you have to try and taste all of the best food and local dishes!

If you like meat then you will LOVE Galician beef, it is incredible! If you like fish then you are in luck because the galician coast offers some of the best seafood in Spain. A summary: f you like to eat, you´ve chosen the right place to do your Erasmus year! Some of the other traditional Galician dishes include: pulpu, raxo and potatos and any kind of shellfish. However, an Erasmus student can´t just spend their days eating seafood!

Where is the best place to go for nibbles or a beer? Well, you can  go to any bar or cafe in the zone of Callee Real. For dinner there are many affordable, tasty plpaces, some of which are: Anduriña, Bombilla and A Casa da Moura.

In general the north of Spain is famous for its food! Galicia and more specifically Coruña offer the greatest range of food.