Everyone must see this badly constructed piece of work! Basically, in short, this is what the famous Leaning Tower is, a symbol of Bella Italia. More than once it has caused fear due to its incline although, against the laws of physics and with a little bit of help from workers as well as pure coincidence, you can go up on foot… and it’s less on an incline than ever. But, what does it seem like to you if we take a look at all you need to know about the Leaning Tower of Pisa? 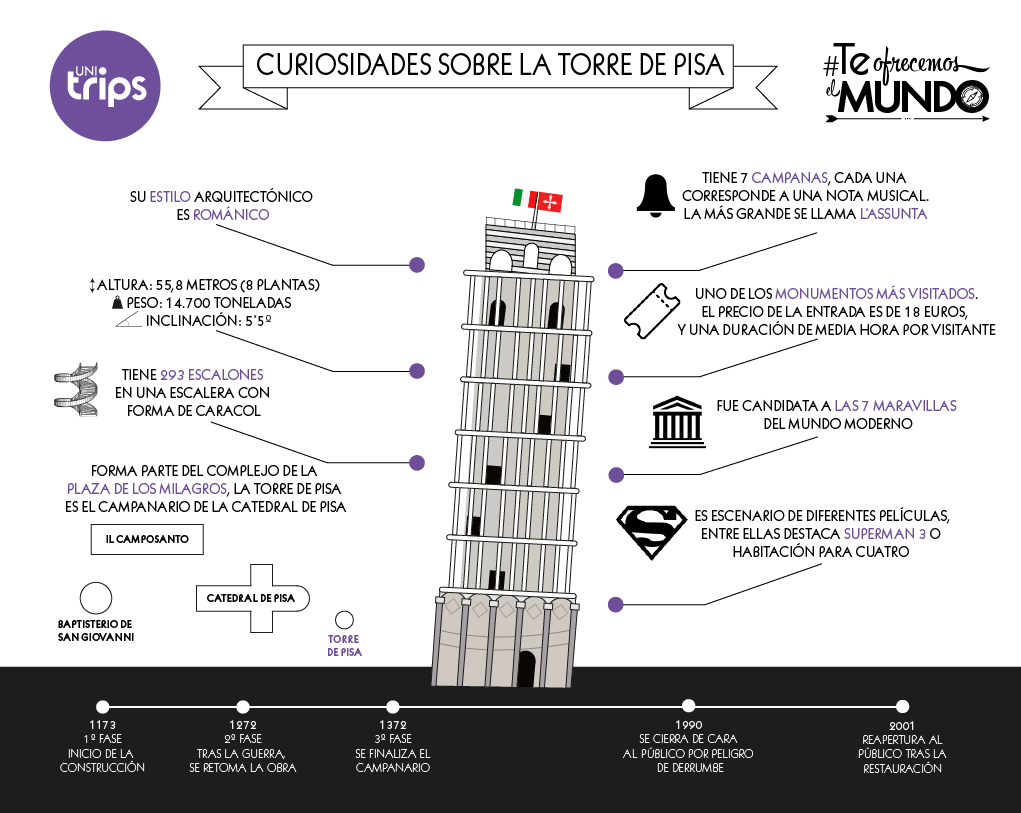 1 – It was crooked from the start

As we mentioned at the beginning, the inclination of the Leaning Tower of Pisa should really be down to an architectural error. Some controversy exists over who was the architect who started it in the second half of the twelfth century. What is known is that nothing else started the first part of the monument; and from that moment it started to lean.

The reason seems to be clear. The tower was built on foundations of barely three meters deep and on top nobody took into account the quality of the terrain; that is that Pisa is very marshy.

In fact, Pisa was a ‘Maritime Republic’, that is, some of the four naval powers of the Italian Middle Ages; thanks to it’s very well protected port in the estuary of the River Arno. But because of the remainders that have been accumulating in the same river, the sea has moved more than 10km. This means that Pisa’s (and the surrounding area’s) terrain is very soft and marshy… and not very apt to build tall buildings on.

So because engineers decided to build a tower on top of not very solid terrain a landslide made the symbolic Leaning Tower of Pisa lean towards the north when work was being done on the third floor.

2 – It took two centuries to finish

Almost 180 years were used, split into three periods, to built the Leaning Tower of Pisa. Although it is true that the project was stopped for almost a century due to the principality wars which happened frequently in Italy during those times. And thank goodness! Some would say, because thanks to these intervals the terrain could become firmer and this benefitted the stability of the monument, if not it would have fallen to the Tuscan ground.

Work resumed in 1272. They built a fourth floor but carefully at an angle to counteract the inclination that it already had from the Romanesque build. However again, they had to stop because of war and conflict
They had to wait another 100 years until finally, Andrea Pisano finished the bell tower. 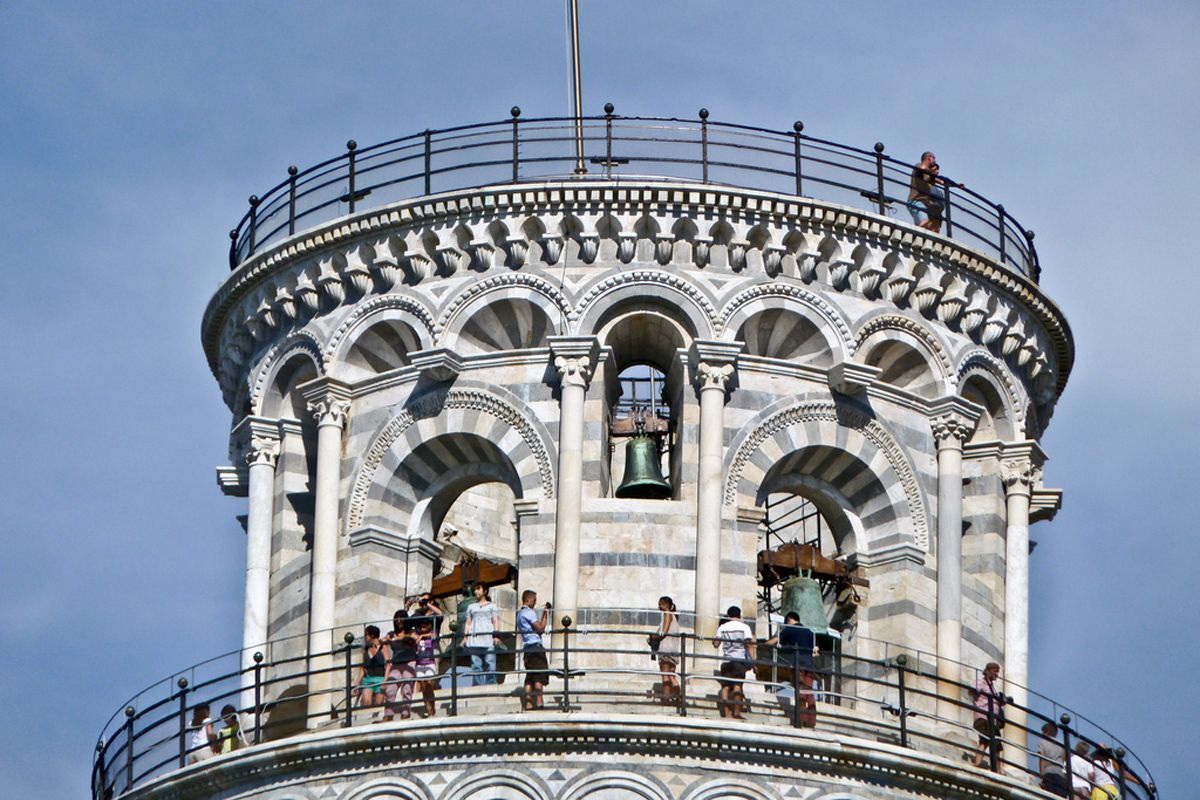 3 – Where the bells ring

Few know that the Leaning Tower of Pisa is in fact the city’s cathedral bell tower, which is situated in the Piazza dei Miracoli, when Romanesque art was popular in Italy, the bell tower and the baptistery used to be independent and separate from the cathedral (El Duomo de Florencia was also separate). The bell tower of Duomo of Santa María Asunta, has seven bells and each one corresponds to one of the seven musical notes. The majority of these were installed midway through the seventeenth century and the tower twisted the other way to the south.

We have already said that, since the beginning, the Leaning Tower of Pisa was a tightrope walking exercise, with the desperate intention to achieve balance and the law of gravity. Interventions have never stopped and some have had to be done urgently, due to bad decisions that worsened still the construction of the Pisan Tower.

This was what happened in the nineteenth century, when the architect Alessandro Della Gherardesca was restoring the monument. Something that did not occur to this renowned man was to trace a path so that the public could see the base of the bell tower. But in order to carry out his plans he had to dig around the tower. The consequence? A flood and more inclination.
The situation has become desperate and dangerous on more than one occasion. But in 1964 the Italian Government was forced to ask for international help in order to try to stop what seemed like a persistent threat of collapse. 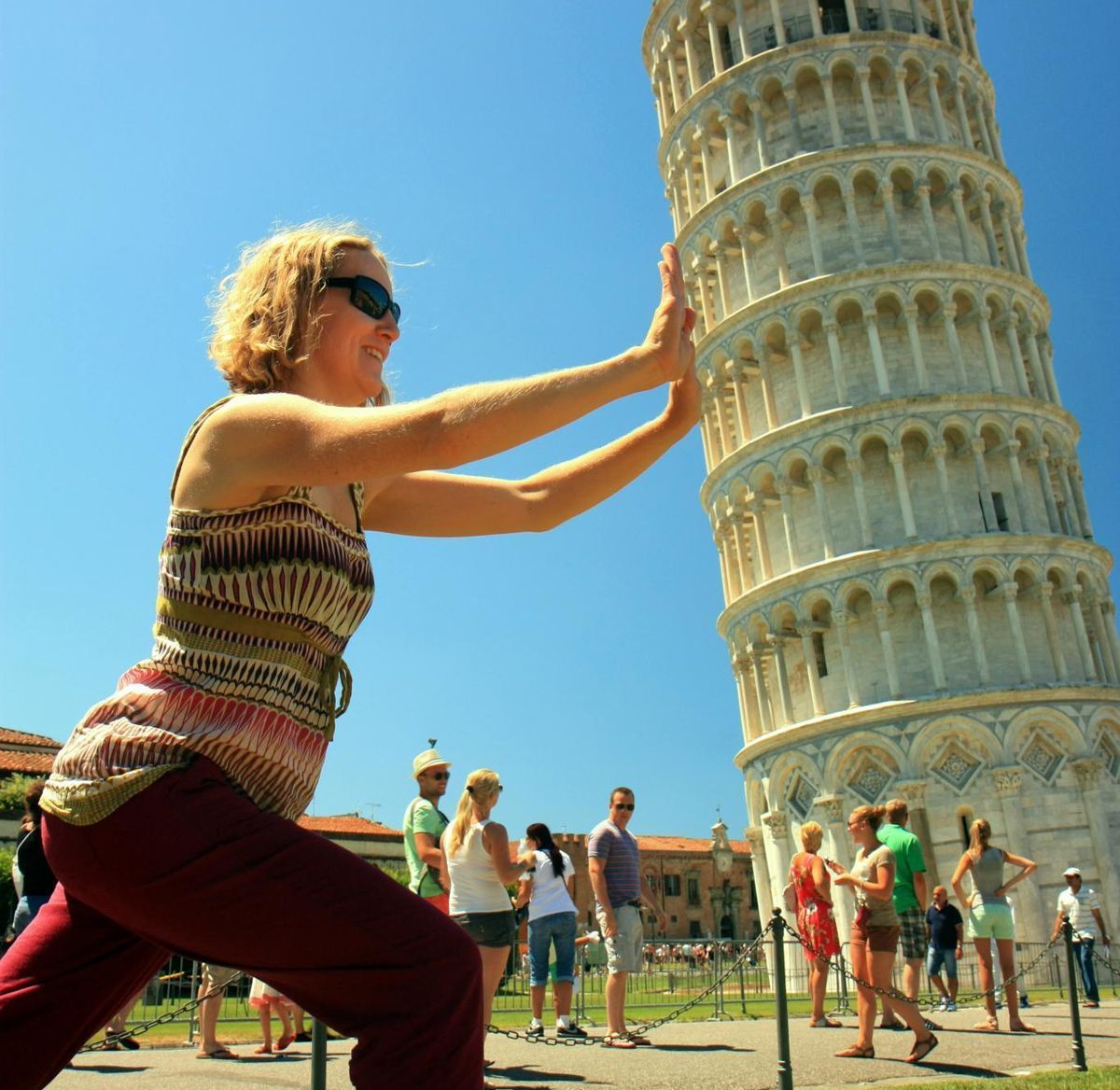 In the 1960s, desperate to try to solve the situation, an important number of history, architect and mathematics experts, amongst others, met to devise ways of tackling the problem of the inclination of the tower. They were trying for 20 years with no outcome!

The thing wasn’t that they couldn’t get their head around the problem but more so the meeting brought about many ideas that they had to practice: the freezing of subsoil with hydrogen, reinforcement of concrete in the foundation, tensors of lead counterweight of almost 700 tons, fixing through two steel cables of nearly 4000 kilos each…eventually, the Leaning Tower of Pisa inclined so much that it had to be closed to the public at the start of the 1990s before the risk of collapse and danger to the visitors.

The Pisan monument left as an impossible task until nine years later it could be experimented on with a new technique. Between 1999 and 2001 extraction took place through a complex system of tubes, more than 60,000 kilos of sand underneath the tower, what left enough space so that they could straighten the tower.
The current inclination is no more than 6 degrees and this, more or less, is the same as it was in the eighteenth century. In June in 2001 a group from the Plaza del Duomo de Pisa, Patrimonio de la Humanidad, returned to prepare the public with very limited capacity to the unique bell tower. According to experts there is no longer any danger for visitors and the Leaning Tower of Pisa will hold standing for at least one quarter of a millennium 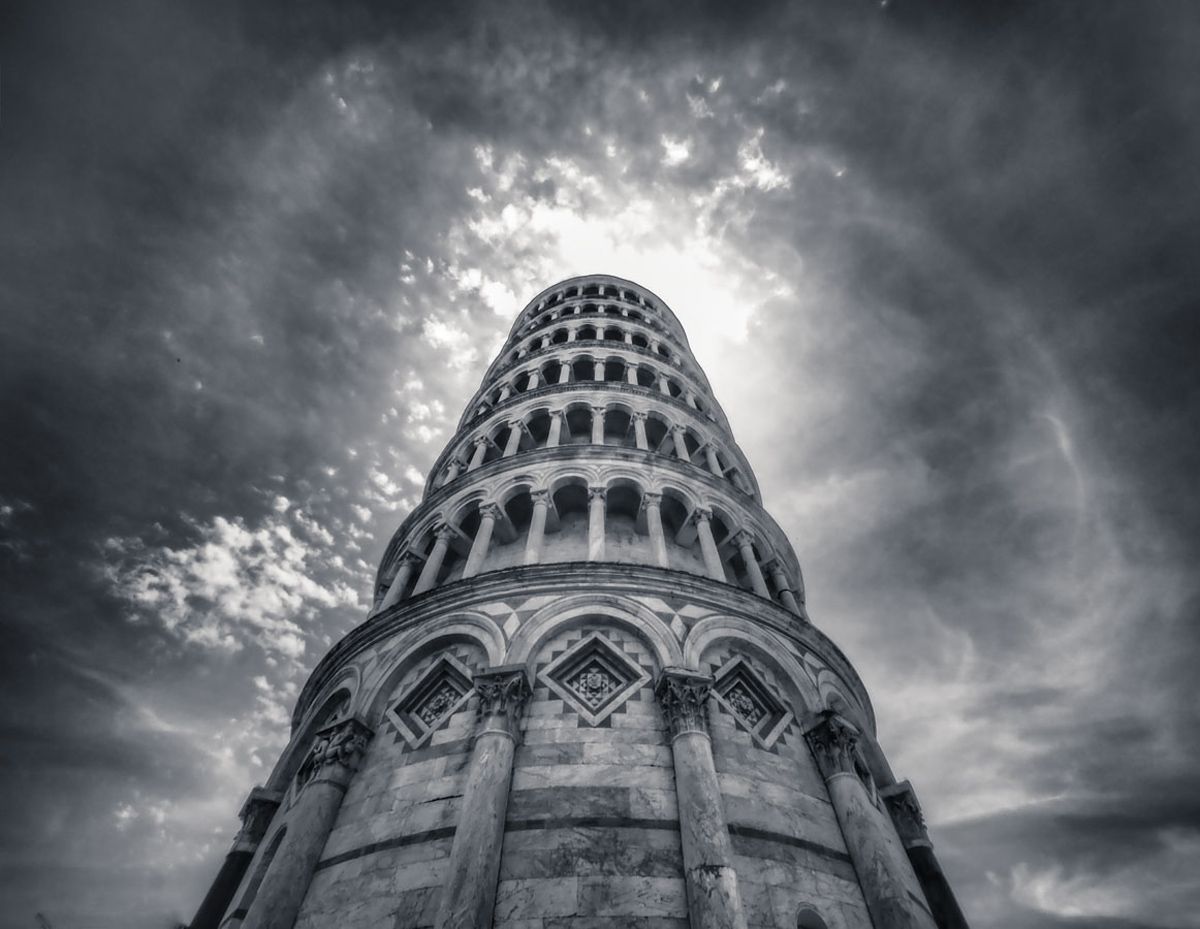 6 – Urban legend and the end of a myth 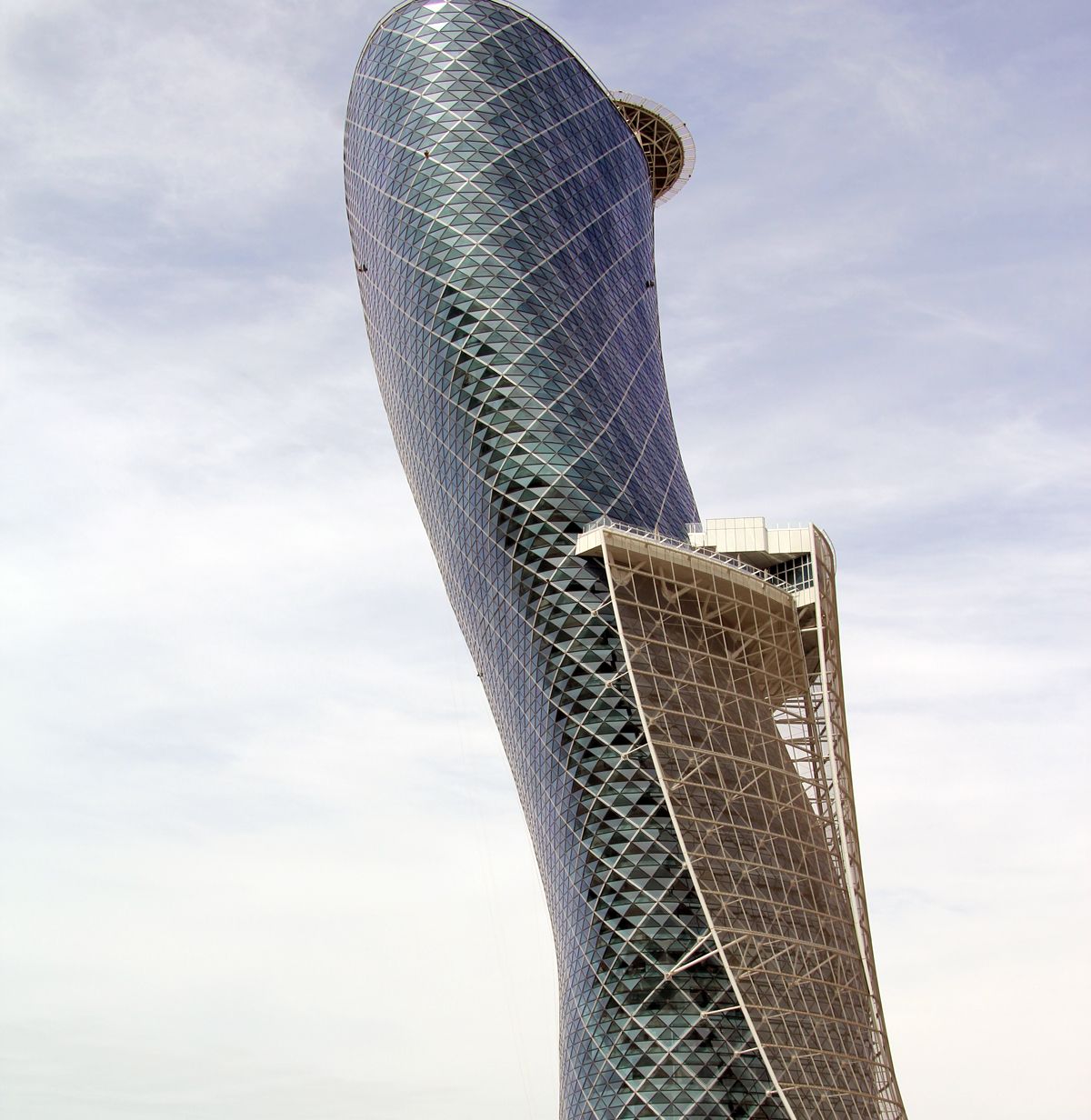 There are some who say that it is true but no one exists to prove it, except the testimony of a pupil of the great Galileo Galilei, who insisted that his teacher climbed to the final step of the Leaning Tower of Pisa to launch two different sized canons. The intention of the Italian physicist was to demonstrate that mass had nothing to do with the speed of the fall. What is certain is that this anecdote to many is an urban legend, seeing that the Tower is not tall enough to appreciate the difference in the fall.

Lastly, we wanted to tell you that the construction of the Capital Gate of Abu Dhabi, ended the myth of the most inclined tower in the world, for centuries the Tower of Pisa maintained this feat. It has more than 5° inclined which has nothing on the 18° inclination of modern building of the Arab Emirates.

7 – It is not the only Tower than leans in Pisa

In Pisa the engineers would not be defeated, and in order to demonstrate to all the Christians that is was possible to have the highest bell tower higher in the city, they often took very risky decisions without considering the ground made of clay and sand typical of Pisa that does no allow the erecting of towers.

In the case of the San Miguel de los Descalzos church, in which the Tower of its bell from the twelfth century has a significant incline.
The San Nicola church had the same luck; its bell tower has a small incline

The Leaning Tower of Pisa became a word icon because of its beauty, but above all as a symbol of the fight against the laws of nature… or as a symbol of ‘idiocy’ of the engineers.

The Tower appears in many Italian films since neo-realism until ‘Amici mei’, an Italian comedy from the 80s translated into Castillan as ‘Habitacion para 4’.

9 – The tower is banned to the people of Pisa

The Tower of Pisa receives millions of tourists who visit from all around the world and pay 18 euros to climb to the top up 296 slippery stairs, but these never consist of the local citizens. The people of Pisa can not go up because it will bring them bad luck…and because from the tower they can not admire what is most beautiful about Pisa: the tower itself!

If you want to go up the tower, the best way to buy tickets in advance is through this official webpage. It is open from 9am to 6pm every day.

10 – Some facts you should know about the Tower of Pisa

Here are some facts for you to show off about when you visit.

Lastly, we leave you with one last interesting fact about the The Leaning Tower of Pisa… Few know that the marble that was used for the construction was taken from a nearby city by the neighbours of Lucca, and the people of Pisa stole it to build the complex Square of Miracles which includes:

And we have finished. With these facts you can be sure that, thanks to Unitrips, you will be able to journey through Tuscany with all you need to know about The Leaning Tower of Pisa.

Why don’t you join us on one of our tours?

Trip at christmas around Europe